Extremely rare pin - Keep Your Lawyers Off My Computer 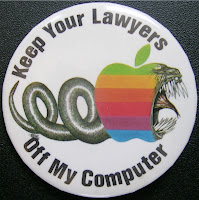 This is the infamous Fanged Apple, a design created in protest of Apple's lawsuit regarding graphical user interfaces (GUI) software. This 2.25" diameter button is in very good condition with all details crisp and clear. It was one of three released last year by a collector in California. It was his last one and they have become extremely rare. It is priced at $65 and that includes postage. To inquire contact Dave via kootenaymac.tel

Provenance: the former owner of this pin, a speaker at several Boston MacWorlds in the early 90's, says "I personally obtained this button from Richard Stallman outside of Lotus's offices in Cambridge, MA!"

"In 1989, Apple's look and feel lawsuit against Microsoft brought the idea of interface copyright to the attention of the programming community. Apple was trying to claim a monopoly over a broad class of graphical user interfaces. If Apple succeeded, not only Microsoft, but every software developer, would be legally compelled to design gratuitously incompatible software." In response, John Gilmore and Richard Stallman together commissioned the design of the "fanged Apple"–a button showing the Apple logo with vicious teeth. This was followed by an advertisement placed in The Tech, MIT's student newspaper, which in turn led to a protest rally at the HQ of Lotus Development Corporation--another "look and feel" lawsuit plaintiff."
History of the League for Programming Freedom (LPF)...https://groups.csail.mit.edu/mac/projects/lpf/History/history.html

update: a second pin - very slightly scuffed - is available for $50