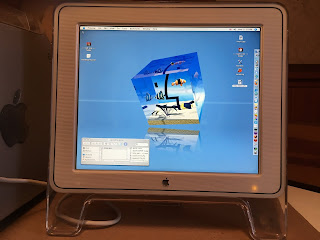 In May 2001, Apple released a 17" Studio Display (Model No: M7649) with a native resolution of 1280x1024. The Apple Display Connector (ADC) is a proprietary modification of the DVI connector that combines analog and digital video signals, USB, and power all in one cable. The unit is in very good condition and features a single cord ADC plug that connects to the PowerMac ADC port. A swipe of the finger on the lower right corner powers up the tower and monitor. Photo shows monitor in use on a G4 Quicksilver tower in this photo from November 24, 2021.

Apple introduced it with the Dual Processor Mystic Power Mac G4 and new ADC monitors in July 2000, removing the industry standard DVI port previously found on the Sawtooth Power Mac G4. ADC remained a standard feature of Power Macs through the 2004 Power Mac G5; ADC was not present on the 2005 Power Mac G5, and Apple resumed use of the DVI connector alongside ADC with the Mirrored Drive Doors Power Mac G4 in August 2002.
Read: https://en.wikipedia.org/wiki/Apple_Display_Connector

Price is $80USD plus shipping. The rear leg will be unscrewed for shipping to prevent damage. To inquire contact Dave via kootenaymac.tel

Posted by d@ve at 8:31 AM
Email ThisBlogThis!Share to TwitterShare to FacebookShare to Pinterest
labels: ADC, apple, lcd, monitor, studio display