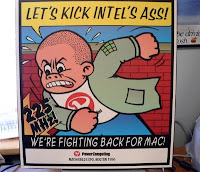 This rare and controversial poster was designed by Frank Kozik, and features his 'Puggo' version of Sluggo from the Nancy comic. The original owner has this to say about the poster he got at the '96 Boston MacWorld: "It was released at Macworld '96 by PowerComputing, the most successful of the Apple Mac clone companies. Few of the posters were handed out, when one of the "SUITS" decided that they would no longer distribute them. They were removed from the booth and the show-floor locations where they were being handed out."

The stories surrounding this poster include real and threatened lawsuits by the Nancy comic distributor over copyright violations and by Intel for being it's trademark being slagged. The word "ass" was also a sore point at Power Computing. This poster has been professionally mounted on a 1/4" wood backing panel that is not removable. There is a damaged corner in the wood at the bottom left of the frame where it fell from it's wall mount. The poster has no damage except the wrinkle outside the black border (click the image to view) and could be professionally restored.

So while the t-shirt version (also available) circulated for a while, this poster quickly disappeared into private collections. Until now. Add it to your collection for $145 plus shipping at cost. To inquire contact Dave via kootenaymac.tel