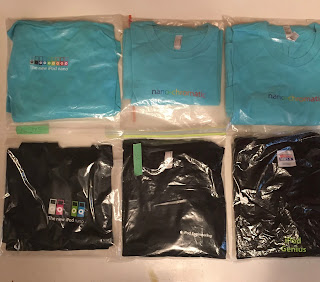 Top row are 3 Apple Nanochromatic iPod T-shirts. There are two size XL (one is new and one worn twice in the NY Apple store and washed twice) and a new size medium. The front of the shirt says "Nano-Chromatic" in a rainbow gradient lettering, while the left sleeve has a white apple logo and text that says "Specialist". The back of the shirt has the 9 different colors iPod nanos and the text is "The new iPod nano". This shirt was the Apple Store uniform promo for the new 2008 iPod Nano premiere.They are priced at $25 each for the new ones and $20 for the washed one.

Bottom left is a rare size medium black Apple employee T-shirt that was the store uniform for the release of the 2nd generation iPod Nano. The front of the shirt reads "Completely Remastered". The back (shown) features the five 2nd generation iPod Nano colors. The Apple logo is on the left sleeve. This Los Angeles Apple Store shirt has been worn and washed once on day of issue and is in like new condition. It is priced at $22.

Center bottom is a size large t-shirt made in the USA of 100% cotton. It appears to be in new condition. It is a rare Apple employee shirt from the second generation iPod engineering department. The front, shown, reads simply ' iPod Engineering'. The back has the 2nd gen iPod shuffles in 5 colors. This highly collectible Apple staff shirt is priced at $25

Bottom right is a black official Apple iPod Genius T-shirt in a size Large. This t-shirt was distributed circa 2004 by Apple for employee staff as an iPod Classic and Genius introduction promo. There is a white iPod Classic image on the lower front that connects to the ear buds. It is new in the original opened bag and priced at $55.

The total list price for these genuine Apple iPod shirts is $172 USD for the set of 6. Quantity price is $120 plus postage. There is a new black iTunes Genius size large as an optional extra for for $50. For more info on some the shirts click the labels below. To inquire contact Dave via kootenaymac.tel
Posted by d@ve at 8:24 AM
Email ThisBlogThis!Share to TwitterShare to FacebookShare to Pinterest
labels: Apple collectible, clothing, collection, ipod, ipod Nano, iPod Classic, shirt