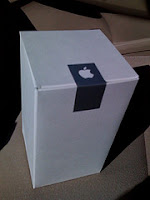 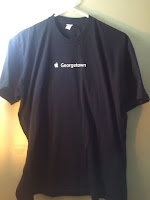 Georgetown Apple Store T-Shirt - it is in a white unopened factory sealed box. Only 1000 were given out at the Georgetown Apple Store Grand Opening on June 18, 2010. It is probably a size Large and media reports and YouTube videos indicate the shirts were black. The shirt shown is an example only as the box is unopened.

According to The Washington Post, Apple is formally opening its Georgetown location after years of long arguments over the storefront design. In fact, it took Apple about three years to schedule this Grand Opening, the report reveals. The Georgetown store is Apple’s 290th retail establishment so far.

This shirt is priced at $60 and will be shipped in a second protective box unless you specify it be opened and flattened for mailing. Postage will be at cost. To inquire contact Dave via kootenaymac.tel
Posted by d@ve at 7:10 AM
Email ThisBlogThis!Share to TwitterShare to FacebookShare to Pinterest
labels: Apple Store, clothing, launch, promo, shirt